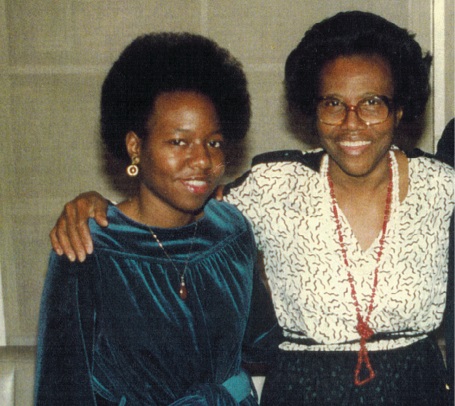 The author, left, with her mother Josephine Jones

Author Wendy Jones can’t exactly prove that her mother, Josephine Jones, was the first black woman manager at a Fortune 500 company, but she certainly makes a strong case for it in her book, An Extraordinary Life.

When she was hired by Standard Brands (now Kraft Heinz) in September of 1953, the elder Jones was “the only black person—man or woman—at the company,” Wendy Jones says, which shouldn’t be surprising. “Think about it. The Civil Rights Act was signed in 1964. The voting rights act was 1965. My mother became a manager in 1967.

“White women could have been secretaries, but there were no black secretaries in the early ‘50s. Standard Brands didn’t even have black janitors. It was like every other company in corporate America back then, racist and sexist.”

It was also thriving. Formed in 1929 by J.P. Morgan with the merger of several food products companies, by 1940 it was the nation’s second-largest packaged goods company, after General Foods.

Manhattan-based and known for its Chase & Sanborn Coffee, Tenderleaf Tea, Royal puddings and gelatins, and Fleischmann’s yeast, Standard Brands subsidized its own cafeteria as a benefit to employees. Jones, a skilled domestic who had worked mostly in private homes, was originally hired as a temp to cover a retiring (white) cafeteria worker for two weeks. She would end up building a decadeslong career there—one she loved despite the tough politics, unequal pay, and rarely getting credit for her significant contributions.

Ultimately heading a six-person staff that served hundreds of employees each day, she became known as an independent problem solver with uncompromising standards, exceptional organization, and creative flair, especially in food presentation.

A single mother who had come to New York from Cross Hill, South Carolina, along with a generation of black southerners looking for better work than sharecropping, Jones eventually earned an associate’s degree in dietetics even though the company refused to help pay for her education. (“Oh, Jo, you’ll always have a job here,” she was told by a personnel officer when she sought the company’s support. “What are you worried about?”)

A few years after advancing to assistant supervisor, Jones became cafeteria supervisor in 1967 and adapted to the many changes in the cafeteria, her role as its manager, and the company itself (which morphed dramatically acquiring several companies including Planters, through the years, and merging with Nabisco in 1981 to form Nabisco Brands Inc.).

Remaining single after an early divorce from Wendy’s abusive father, Josephine purchased a historic Harlem brownstone in 1976, restored it, and became a successful activist for the preservation of her then drug-ridden neighborhood. She also purchased a home in South Carolina for her own mother, regularly helped support other family members, and put her only child, Wendy, through Dalton, one of New York’s most exclusive private schools, and Yale.“ Wendy would go on to receive her master’s degree from Columbia University.

“A lot of the things my mom did, she did because of me,” says Wendy. “I was only at Yale because of her. I didn’t have loans. I did work-study but I got out of there debt-free. My mother did that.”

Her life was extraordinary, indeed. But she was not prone to talking much about it. “My mom wasn’t a me-me-me person,” says Wendy. “She was more interested in helping others and talking about them, or me.”

What led her to share her story as she does in this book, which is primarily an oral history, was a mood shift Wendy noticed in her once- indomitable mother when she was in her early 70s.

“One early spring afternoon, I found my mother sitting in the darkened dining room of her brownstone, dressed in black, head bent in depression,” Wendy writes in the book’s prologue. “Despite the problems that had cascaded through our lives when Mama was raising me —my father leaving when I was an infant, my mother working three jobs to support us, Mama’s siblings borrowing money they never repaid—I had never seen her depressed. When I asked what was wrong, my mother told me that it didn’t seem that her life had come to much.”

In fact, as part of a company reorganization that left many in similar positions, Josephine had been forced to retire in 1984, at the age of 64. The service workers, including managers, were not celebrated as those in other functions were, and were offered an inferior severance package as well. Jones ended up suing for age discrimination; the company settled, which did little to compensate for its thanklessness for her lifetime of dedicated work and success against all odds.

“I don’t say I retired; they just kicked us out,” Josephine recounted to her daughter for the book. “That was the thing that hurt the most.”

Wendy believed it would empower her mother to tell the story of how she rose from working in white New Yorker’s kitchens to a management role in a corporate powerhouse. While Wendy believes that Josephine was the first black woman manager in the Fortune 500, she welcomes anyone who can prove otherwise by bringing forth verified challengers to that throne.

“I want to encourage people to interview that godmother or aunt who we need to know about before she’s gone,” Wendy says. “That Great Migration generation is leaving us and if we don’t capture their stories now, we never will.”

The details of Josephine Jones’ story render it largely irrelevant whether she was in fact “the first” or not. She was, indisputably, a corporate pioneer for African Americans of any gender and, without her daughter’s determined efforts, her story would have been lost, as far too many extraordinary black women’s stories are.

Josephine died in 2017, before An Extraordinary Life was published by Ida Bell Publishing, the press her daughter founded and named for Ida B. Wells, to publish more stories like hers. (To purchase it, go to idabellpub@gmail.com.) Wendy was able to read her mother an early proof of it, however, and, although Josephine had difficulty speaking by then, she said, “You did it for me. This is good.” Says her daughter: “That’s the best review I could have gotten.”

Meet the First Black Man Appointed as VP of Div...